An interesting thing about the English language is how many words sound exactly alike (or almost exactly), but the distinction in meaning is in the spelling.  Here is a great example – bridal and bridle.  When you think about the distinction in meanings in these two different words and look beneath the surface, the connection between the two comes into almost shocking perspective.  To bridle means to curb, to bring something under control – how is that much different than what happens to the bride (in many if not most instances)?

In the photo here, my little sister and I are contemplating the dolls we received for 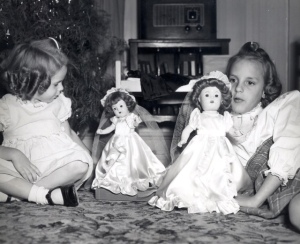 christmas when we were 4 and 7.  Of course you can interpret the meanings expressed in this photo in many different ways.  To me the look on my face more or less says it all .. not particularly overjoyed to say the least – more of a vacuous resignation.  Even though I certainly got the message that was intended in the doll’s attire little did I realize that the symbolic meaning was actually to bridle what I, as a girl child, was destined to live out in my life. Nor could I ever have imagined then that within a couple of short decades my persuasions toward women would turn in directions that my parents, and society at large, would choose to not only bridle, but literally snuff out like a burning candle.

It has taken many long decades to unravel the bridles that curbed my own experience, and reach a point where I live my life authentically and honestly.  I am not sure this could have happened at all if it were not for the amazing gay rights movement, the social changes that have emerged as a result, and even more important the support of friends and close family.  A few years ago I wrote a short article for Issues in Mental Health Nursing (2008, 29:6, p. 551-554) that addressed the bridles that control the social/cultural environment in nursing where lesbian existence is concerned.  The title of the article is “Lesbian Nurses: What’s the Big Deal?”  I open the article with a story about my own experience of homophobia among nurses in the academic world in which I work, and explain how all nurses are constrained by fear that they will be ridiculed and shamed by being called “lesbian” when we are strong and assertive in our professional lives. The fear is sadly well-founded. Many nurses, whether actually lesbians or not, have indeed been intimidated and silenced by such ridicule. Here is a brief excerpt from that article:

When nurses are silenced, or when any of us feel constrained to assert who we are and what we have to contribute, everyone loses. It is not that “anything goes” and that we should all spill our guts out to the entire world. But when as a group we knowingly or unknowingly constrain any perspective or contribution from reaching full expression, we sustain a dominant hegemony that reduces our collective appreciation of the full range of human experience. As long as we behave in ways that affirm our complicity with the belief that lesbian identities among us are abnormal or shameful, we sustain the damaging effects of social stigma. (552-553)

Indeed the bride dolls in the photo could well have been dressed in the typical nurse’s uniform of the 1940’s and they would have conveyed much the same imagery.  At least a nurse doll would have represented a small, but significant aspect of potential for a woman that was far from the ideal that my parents intended for me and my sister – a woman capable of contributing to the well-being of society and of earning her own way in the world.

Thankfully, nursing has moved far beyond what it was in the 1940’s and the struggle to gain a more accurate social image of who we are and what we contribute has made a difference.  There is still a significant challenge to fully unbridle our abilities, but it is happening!  And hey — I wrote an article addressing the stigma of homophobia in a nursing journal!  This is truly something that my little 7-year-old self could never have dreamed possible!