Reflections on the challenges of participatory democracy

For many years I have been thinking about the challenges of Peace & Power, and other forms of participatory democracy, and the “Occupy” movement has intensified my thinking about all of this. I live right next door to a vacant lot in Oakland, California, where last week-end the “Occupy” group tore down a fence last week on Saturday night, then early Sunday morning the now-infamous Oakland police peacefully removed the small 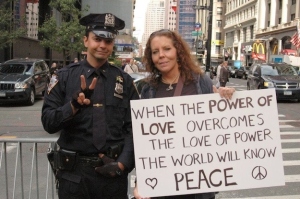 encampment. We watched it all from our living room window but even more intriguing to

me were twitter, Facebook and blog posts about some of the things happening just before, and during the week-end attempt at taking over the vacant lot. The lot is only 3 blocks from the Frank Ogawa Square outside of city hall, where the police had evicted campers a week before, with not-so-peaceful outcomes. You can read one of the most vivid blog accounts of the experience here – and follow the 26 comments left in response to Rebecca’s description .. it is all packed full of insightful and interesting perspectives.

When word spread that the Oakland general assembly (GA) had decided to take the lot, there was a huge response from a number of groups in the community, include residents in our apartment complex and parents of the Oakland School for the Arts middle and high school students (housed on the other side of the lot in the Fox Theatre building). These groups formed a coalition (within hours) and took an emergency alternative proposal to the GA, asking them to not attempt to take the lot (which is private property) and take some 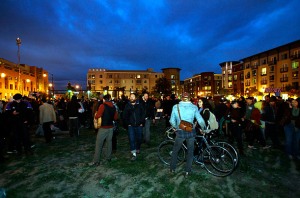 time to consider alternatives. The facilitation committee agreed to place the proposal first on the agenda of the GA, but when it came time for discussion, there was generally a negative response. Since I was not there, I cannot give a first-hand account of what happened, but I know that one of the women who framed the alternate proposal blogged about the experience, in particular the sad fact (described in Rebecca’s account) that the voices of those who had not been camping were not welcome in the discussion. The bottom line was that the alternatives were not considered and the GA resolved to proceed with the plan to take over the fenced lot.

Even though I have not participated directly in any of the “Occupy” happenings, I feel compelled to share my reflections on what is reported about the processes of the movement because 1) I have written a book on the subject, and 2) I have personally experienced just about every “vignette” reported in my own experience with “Peace & Power.”

The issues that people most often voice when they first hear about the process include things like the fact that it is tedious and takes too much time, or skepticism that anything can ever get done using such a process.  But these are actually “surface” issues that are easily addressed when the process is working.  Here are a few of the challenges that I have experienced that are far more fundamental, difficult and also vitally important to address:

There is much more to said about all of this, and only time will tell how far the alternatives of the “Occupy” movements will prevail and influence traditions and cultures of the future.  But I am hopeful — the young people who have created and who are so deeply committed to the new values are so inspiring!  So I am cheering them on!  the fact that they are doing this is vitally important, because if nothing else happens, they now have an experience that instills in them (and in all of us) an ideal that is possible.  That ideal may not become fully real, but the attempts to make them real are the most important ways to energize real change! As Margo Adair once wrote: “The very fact that you can imagine these things makes them real, makes them possible.” (In Working Inside Out: Tools for Change)

2 Responses to Reflections on the challenges of participatory democracy