Back in the 1980’s, Charlene Eldridge Wheeler and I formed Margaretdaughters, Inc. – a feminist publishing company. Two of our books have major historical significance but they have long been out of print, even though it is possible to find stray used copies on the 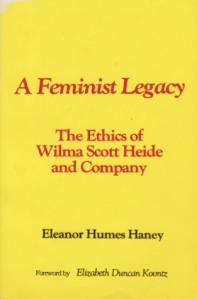 internet!  But now, I have converted them to eBooks, and one – A Feminist Legacy: The Ethics of Wilma Scott Heide and Company by Eleanor Humes Haney is now available in all the common ebook formats. Here is the link to the Kindle edition!  Soon Wilma’s own book Feminism for the Health of It will also be available – I will post a notice here when this happens!

Charlene and I connected with Wilma as a result of our reaching out to Barbara Schutt, a former editor of the American Journal of Nursing, for another project we were working on.  Barbara had worked with Wilma when Wilma, a nurse and the third President of NOW, was trying to convince the leaders of the American Nurses Association to endorse the ERA – a major undertaking to say the least!  They succeeded, and became life-long friends.  Charlene and I connected with Wilma to explore the possibility of her coming to Buffalo, New York, to speak for an International Women’s Day event that was being co-sponsored by Emma: Buffalo Women’s Bookstore and other groups in the community.  Wilma agreed!

Charlene and I spent several days hosting Wilma in our home, and engaging in long,

thought-provoking and fun conversation – Wilma had a marvelous sense of humor, which you will glimpse when you read the books we published!  We shared with her our first Margaretdaughters book – Peace and Power: A Handbook of Feminist Process.  Wilma told us she wept when she read it, wishing it had been part of her life long ago during the difficult years of her NOW presidency.  She told us about her doctoral dissertation, and before we knew it, we formed an agreement to publish her revised and updated dissertation as a book.  A short time later we connected with Wilma’s friend Eleanor Humes Haney, who had been writing a book about Wilma’s remarkable life – and Margaretdaughters became her publisher!

We worked closely with both Wilma and Ellie for several months, and had almost completed the final proofs of Wilma’s book when she died suddenly of a heart attack.  We traveled to Philadelphia for a memorial service on the campus of the University of Pennsylvania to share our sorrow as well as remembrances with many of Wilma’s friends and family.  Then we went back to work to finish up the final tasks of publishing the books which commemorate her life and work.

In preparing the books for eBook publication, I was amazed at how much of the content of both books remains so relevant today.  There are a few places where the ideas or the content are a bit dated, but these are so few and far between that it is very easy to forget they were written almost 3 decades ago.  They both offer inspiring ideas to energize the important work that so many of us continue – seeking a path of wholeness, peace and social justice for all.  I invite you to obtain your copy of Ellie’s book now, and return here with comments and feedback!  It would be terrific to have a discussion with you!